Because the brief requires me to make drawings of the space I’m working in, I thought I’d make some conceptual diagrams of musical instruments, to represent the context in which my project is happening. I wanted to represent the ways in which a guitar, a piano and a trumpet work, but ultimately (and looking back at it I can only blame it on laziness, really) I only did this wacky sketch of the set up that I used in my short lived attempt at electroacoustic music.

To me it was an interesting experience to practically try out producing sounds and music without actually playing an instrument – something that any turntablist 30 years ago was already doing, and highbrow avantgarde tape musicians even long before that.

In a futile attempt at making the functioning of the sketch above clearer, I tried to do a diagram of it. Soon enough I had to realise that there’s no point in trying to represent feedback loops through conventional visual means, and the result is more puzzling than helpful really. But that’s a good thing because feedback loops are a puzzling phenomenon (especially if you play them in your music), so this weird and factually inaccurate diagram on the right might bring you closer to (not) understanding what I’m talking about.

At this point I didn’t know where my work was going to, so I decided to draw a good old conceptual map: 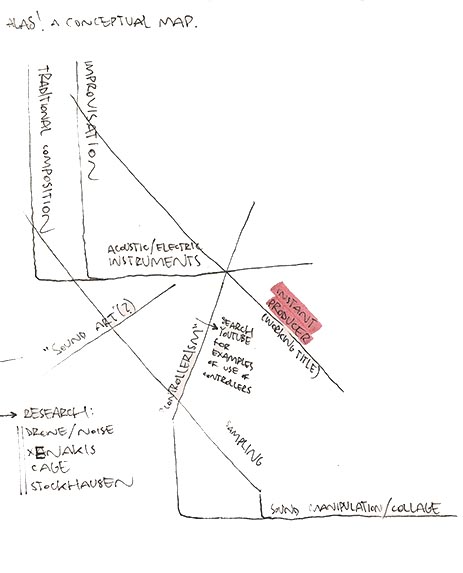 On one hand this helped me to locate the outcome of my project (which is actually quite clear to me) among musical practices, and on the other it made clear to me that my theoretical framework is missing some stuff, or at least that there’s a bunch of things that I know from word-of-mouth or because I came in contact with them one way or the other but I have no structured knowledge about.

So I condensed my amazing conceptual map into this simpler one, focusing more on the outcome of the project, and then I headed off to the library to do my research.

I spent the afternoon browsing through texts about mainly Stockhausen and Cage, and checking out graphic scores from the 1960s, and came across a lot of data that wouldn’t be directly relevant to my work but helped me shape my own ideas and perceptions about what I’m doing and where it’s coming from.

Eventually I had to frame the results of the day in a way that would make sense to write into this blog, and after not being able to come up with more of a statemen than “…mmmh, interesting” I decided to freeze this post and take a deep breath before I do anything else.

Two days later I realised how much I’m missing the point of the project by concentrating so much on things that are relevant to it but in a somewhat distanced way. The brief requires me to make drawings of the space of production or comparable place (which for me is Ableton Live), so that’s exactly what I’m going to do next.

This entry was posted in goldsmiths and tagged spaces of production. Bookmark the permalink.